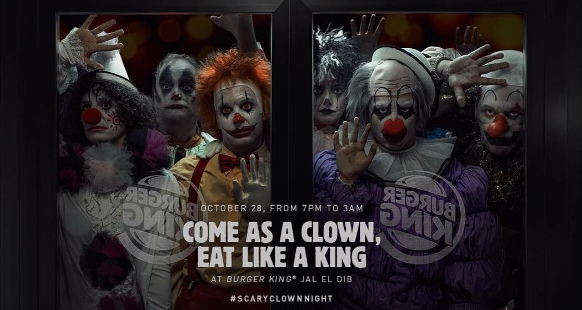 A few days ago I gave a short presentation on a branding meetup in school about the never-ending battle between Burger King and McDonald’s. I don’t know what all the involved ad agencies and marketing departments smoke to get this high every now and then, but I have to admit I’m truly fascinated by the way these two jump at each other’s throats.

We’ve seen well-placed street signs, Halloween spookiness, and even a fantastic cinema ad played after the movie “It” (see spot below to have a good laugh), but the newest campaign is the creepiest of all (so far).

This Halloween Burger King offered free Whoppers to those entering their restaurants dressed as clowns. You’ve probably seen the horrid video online already. But the fast-food giant took it a step further this time and rolled out this campaign in more than just North America. Fans in the UK could also order free burgers in clown-gowns, with the motto “Come as a Clown, eat like a King”. What surprised me was that even Hungary took part in the campaign, whereas we traditionally don’t really celebrate this “holiday” in our country. We prefer to think of our loved ones the day after, on All Saint’s Day.

The Hungarian offer took place this weekend, right before the official day of Halloween, with some terrifying ads and a terrific slogan:

A bohóc is lehet király.

This fun little play on the words translates as: “The clown can also be king/cool.” Have a look at the creatives below and see for yourself how not cool those clowns are! (Especially the one that looks completely like Ronald McDonald, I’m surprised that one doesn’t involve copyright issues.)

Fun fact: I visited a Burger King in Budapest during the weekend and asked the young lady at the counter if anyone had claimed a Whopper dressed as a clown. She admitted there were a few customers who did, and being afraid of clowns, she wasn’t happy about it, to say the least. And to be honest I have to agree with her: clowns can be frightening! This campaign could have created the perfect opportunity for committing crime, as seen illustrated below. I guess Burger King could’ve asked their employees before publishing such an offer. In my opinion, this campaign is far from ethical. Pushing the limits can be fun, but creating an international campaign that helps deepen the negative image surrounding clowns and the competition’s primary mascot is not nice. Not to mention the painful failure of Burger King’s King figure – the brand should pay more attention to their own business.

Talking of business, the campaign was probably pretty successful, not measured by the number of spooky clowns and free burgers, but rather by the social media buzz around the whole action. Just look at these #scaryclownnight hashtags on Instagram for a great example.

All in all, I’m excited to see the next move on the battleground. However, I hope McDonald’s will soon get their act together and emphasize the good side of Ronald too. The CSR team is already doing a great job by supporting sick kiddos and their parents. Way to go, Meki!

Prepare yourself a cup of tea and enjoy a selection of funny video ads, hideous billboards, well written online marketing campaigns and other brilliant solutions my fellow advertisers come up with.